Sometimes encouraging can be as simple as not picking people apart on different opinions. My friend Dena Dyer came up with a compromise for political arguments by creating a clever YouTube video. I liked it so much, I asked her opinion to put it on "Mornings," and then she wrote a press release about her video. She's given me permission to share it with you.

After noticing that the nomination of Sarah Palin had re-ignited the "mommy wars," mom-blogger Dena Dyer created a Dr. Suess parody video called "Red (State) Mom, Blue (State) Mom" urging mothers to vote their beliefs, not fight about them.

Fredericksburg, Texas (PRWEB) October 18, 2008 -- The nomination of Sarah Palin has re-ignited the "mommy wars." Over water coolers, in chat rooms and in person, mothers are once again sparring over politics, childcare choices, and the work/life balance.

Award-winning mommy blogger Dena Dyer says, "It bothers me that so many mothers are up in arms, and that they are spending countless hours fighting about the candidates."Dyer has friends on both sides of the political spectrum, so she came up with a Dr. Suess parody that encourages moms to vote their beliefs, not fight about them. "Red (State) Mom, Blue (State) Mom" is based on the classic children's book One Fish, Two Fish, Red Fish, Blue Fish and is available on YouTube at http://www.youtube.com/watch?v=GxVugi06wyM.

The video was featured on FamilyNet's national morning show, "Mornings with Lorri & Larry." Co-host and guest coordinator Lorri Allen says, "We are always looking for timely stories on our morning talk show. Dena Dyer's Dr. Seuss parody was a perfect fit for us. She not only entertains, she also offers a peaceful solution to political bickering."

Dyer believes that moms have more in common than they think. "I've been a stay-at-home mom, at work-at-home mom, and a work-outside-the-home mom. I've had my kids in public and private schools, and I have a lot of friends that homeschool their children. And you know what? We moms are more alike than not. We tend to want the same things for our children, though we may disagree on how to get there."

She adds, "I hope moms will watch the video and laugh. I also hope they'll realize that the energy they're spending on battling other moms could be better spent on making the changes they long for a reality."

For more info, including the text to "Red (State) Mom, Blue (State) Mom," visit http://www.denadyer.com.
Posted by Lorri Allen at 3:55 AM No comments: 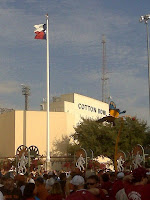 I love this time of year! College football is so much fun to watch, and if you're a fan like me, it's great exercise--there's all the jumping and cheering in the stands and the throwing of things if you're watching on TV.
Time for true confessions: I am such a fan that it is hard for me to be a Christian Encourager when I think of my team's dreaded rivals. But in the last few years, I have decided it was time for me to grow up. How can I be a faith-based talk show host one day and be yelling nasty things the next day in the Cotton Bowl? Well, not that I would normally think of nasty things to say, but there's this one part of the fight song that the whole Longhorn nation has adopted that is just not polite language.
So this year, I prayed for the best team to win, for no one on either side to get hurt, and then... the hard prayer... to surrender the game! See, I think I thought that I could will my team to victory if I shouted louder, concentrated more or tensed harder. So many, many times in the dramatic game last Saturday, I prayed, "Lord, I surrender this game to you."
Now that might make me a bad fan to some. Like I was giving up. But it gave me peace. Victory in a football game just can't take precedence over victory in Jesus. I didn't want the rivals or the outcome to have that much control over me. 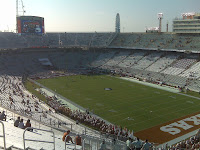 And you know what? I can't take credit for this, as much as I'd like to, but our team had a surprising upset over the #1 team in the country! And you know what else, the rivals' fans I encountered were nicer to me than I've experienced in years. Maybe God loves people from Oklahoma, too. Ha ha... just joking.
OK, now I'm going to start working on surrendering that Missouri game tomorrow night...
Posted by Lorri Allen at 3:23 PM No comments:

When my husband gets grumpy, I feed him. Then he becomes the sweetheart I fell in love with. When I notice that every little thing makes me angry, I know I need a nap. For him, it's food. For me, it's sleep.

What are the signs you have gone from being a great person to a grouch? Most of us want to be encouragers, role models, Christian examples... but we are human. We can get waylaid by low blood sugar, fatigue or something else.

Please take care of yourself -- and I promise that I will, too! I don't like being angry. Hmmm, a nap sounds good right now.
Posted by Lorri Allen at 1:00 PM 2 comments: