When you get an email like the following one at 5 a.m., after just arriving at work... you think, "Welcome to Arizona."

This evening (Wed 9/29) Cliff found what we thought was a dead baby rattlesnake in the parking lot by the last curb. When we attempted to remove it to the desert, it reminded us that it was very much alive and upset.
It then proceeded to crawl into the drainspout at the north end of the building. Per Bill's instructions there are 3 cones around the spout. Since several people who work late park out back, please be careful when going to your car, since it was right were one would walk when leaving. 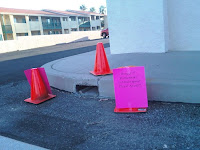 My next thought was, "Good thing I park in the front lot." After returning to my desk after the on-air shift, I read this message:

Thanks to you & Cliff for being alert, as of now the problem has been resolved, I put a hose in the roof drain & the flow of water brought him from hiding in the darkness to being exposed by the light. At that time the forces of darkness & the forces of light collided & I was able to intentionally remove his head. Once again light has triumphed over darkness.

Normally, I'd advise prayer as a hedge for any scary issue in your life. But traffic cones and Godly men can help, too.